Demolition of Vessels at ALANG: A Brief Look

In the late seventies, a ship drifted towards Gopnath point and ran aground. The incident attracted serious attention of the Government of India (GOI) as well as other activists and NGOs engaged in protecting environment. Anyway, the ship was abandoned by her owners in absence of a viable solution for salvage.

At around the same time, Capt. N. Sundaresan, the Port Officer at Bhavnagar, came up with two locations as possible sites for ship demolition, one north of Alfred Victor Port and the second at Alang. His conclusions were based on a study of the Alang Light House, and the gradient, speed of current, tidal conditions, seasonal wind velocity and directions, monsoonal patterns and (potential) road access to the coastal area.

On 12th Feb 1983, the Master of the vessel MV KOTA TENJONG (the first ship scheduled for scrapping) who had been ordered to anchor Off Gopnath Point, ended up accidentally anchoring his vessel off Alang Light House due to his inexperience of the area. The vessel was beached the next day, and Alang, proving all speculations and uncertainties wrong, came to succeed. Since then Alang has grown phenomenally and it is the most eco-friendly and biggest ship scrapping yard in the world today. 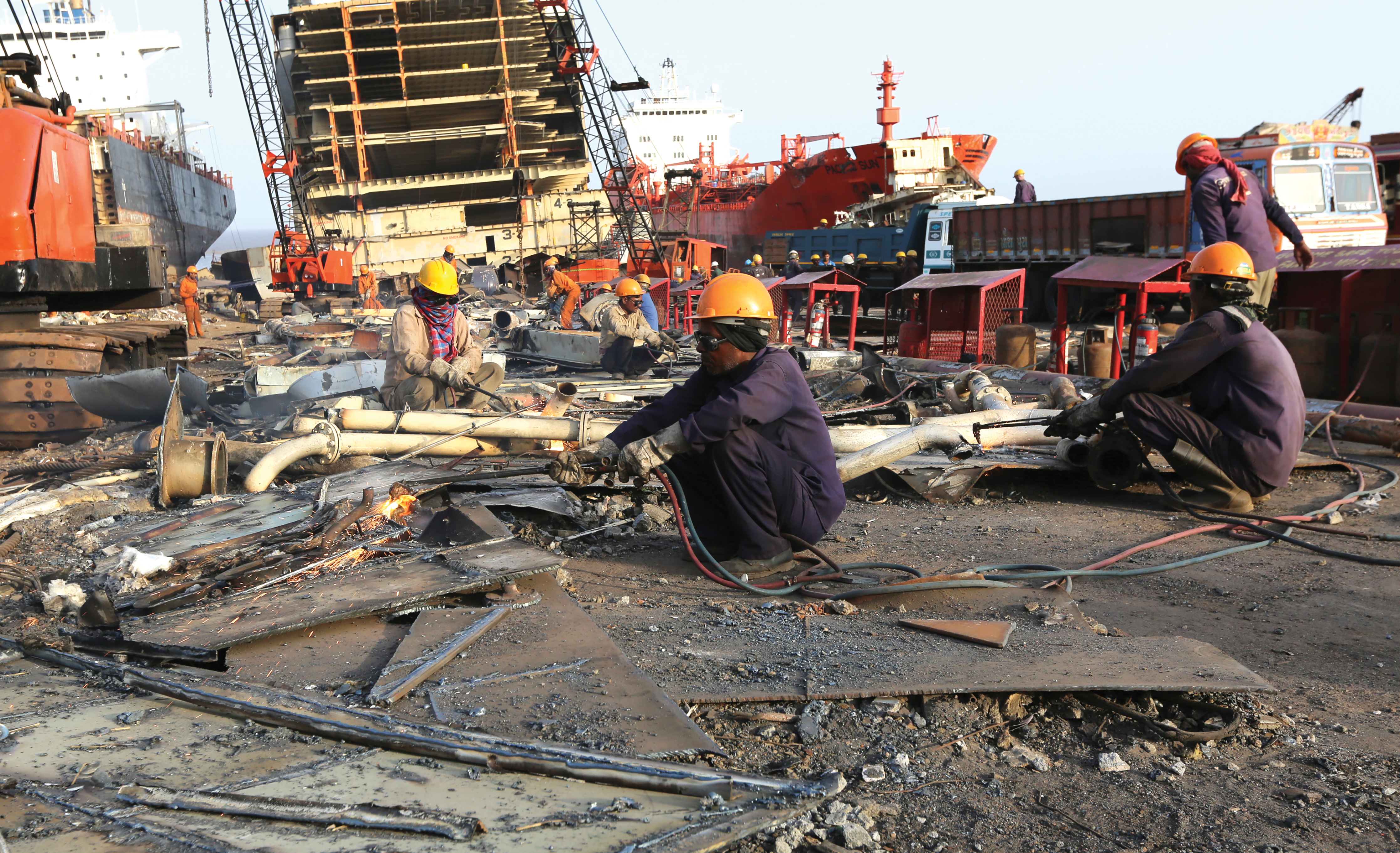 Since then Alang has grown phenomenally and it is the most ecofriendly and biggest ship scrapping yard in the world today. The basic features of the Alang Ship Recycling Yard is given below.

NO. OF PLOTS DEVELOPED

PLOTS IN OPERATION AT PRESENT

131 including 7 plots for VLCCs

THE SHIP RECYCLING INDUSTRY AT ALANG

Ship Recycling is viewed as an eco – friendly industry because it generates steel in large quantity without consumption of raw materials and resources like iron ore and coal in comparison to integrated steel plants. The industry in India produces about 4 MMT of steel every year. It employs 50,000 direct workers and provides employment to many more indirectly engaged in rolling mills, scrap trading, oxygen gas plants, logistics, real estate and the money market. The tax revenue generated by this industry alone is close to INR 25 Billion annually for the Central and State Government.

The evolution of the Alang Ship Recycling Yard started in 1983 with the formation of Ship Recycling Industries Association. The main objective of the body was to structure and administer operations at par with “world class” standards.

Till 2006, there was no uniform standard/norms set by the GOI/Govt. of Gujarat and the Recycling activity was completely dependent on the respective Yard operator about convincing the authorities. The ship owners (sellers) overseas used to finalize commercial terms of the S & P business on their own terms and conditions. All this changed following international protests and dialogues over demolition of a French Military vessel – MV CLEMENCEAU that was eventually called off, and a cruise vessel – MV BLUE LADY that could be demolished after huge delays only with an order of the Hon’ble Supreme Court of India causing a loss of USD billion to the owners/buyers.

A proper regulatory structure emerged on the basis of the Order dated 6th Sept 2007 of the Hon’ble Supreme Court. The Order stipulated very stringent Guidelines and Regulations addressing the different operational points – Advance Declaration with full documents for initial desk review at authorities’ office / Permission Prior to Entry & Anchoring and Desk Review on board by all concerned Govt. agencies and authorities simultaneously and concurrently to ascertain ‘asbestos/toxic/hazardous wastes, sludge etc.’ on board.

A nodal agency called Gujarat Environment Protection & Infrastructure Ltd. (GEPIL) has been specially appointed and authorized by Gujarat Maritime Board now undertakes the task of managing the TSDF (Treatment, Storage and Disposal Facility) aspects of scrapping. GEPIL has its office and treatment plant near Alang Scrap Yard itself. Almost all the Plots/Recyclers are well equipped presently, and they are meeting the International Standards and best practices with trained workers and technically qualified Engineers and Safety Officers.

Alang may be the largest ship recycling facility in the world, but it faces competition to some extent from recyclers of Bangladesh (Chittagong), Pakistan (Gadani), China, Turkey and Japan to some extent.

Not withstanding its status of being up to international standard, the Scrap Yard has no berth or mobile plat-form for landing the crew and materials from a beached vessel. There is also no slipway or catwalk for connecting the vessel to shore. crew / items landing.

Alang does not have safe and well – equipped small boats or a walk way to connect the vessel to shore. Consequently, ship’s crew land directly in the mud from the beached ship and wade out; if beached far from shore, then they have to wait till the tide subsides, for safety.

Alang also lacks good illumination at night because the lighting is inadequate.

The regulatory stipulations and the process at Alang are elaborate, strict and complex compared to scrap yards in other countries. This makes scrapping at Alang relatively unattractive from the ship owners’ perspective.

Like any other industry, involvement of third party middlemen, market decline and unethical business practices affect this industry as well adversely.

The rates vary, depending on size/ type and condition of the vessels and could be USD 5 Per LDT higher than the rates above. Also, the maximum demand is for the mid – sized vessels with LDT of about 20000.

In comparison, prices in other countries (except Bangladesh and Pakistan) are quite low and in the range of USD 255 – USD 285 PLDT. Therefore, Alang is attractive commercially.

For development of Alang, the Government of Gujarat has signed an agreement with Japan International Co – operation Agency (JICA) for upgrading the existing Alang – Sosiya Ship Breaking yard. The project is due to be executed by GMB and, expected to be completed by 2022. Overall therefore, Alang is definitely on a good growth path. 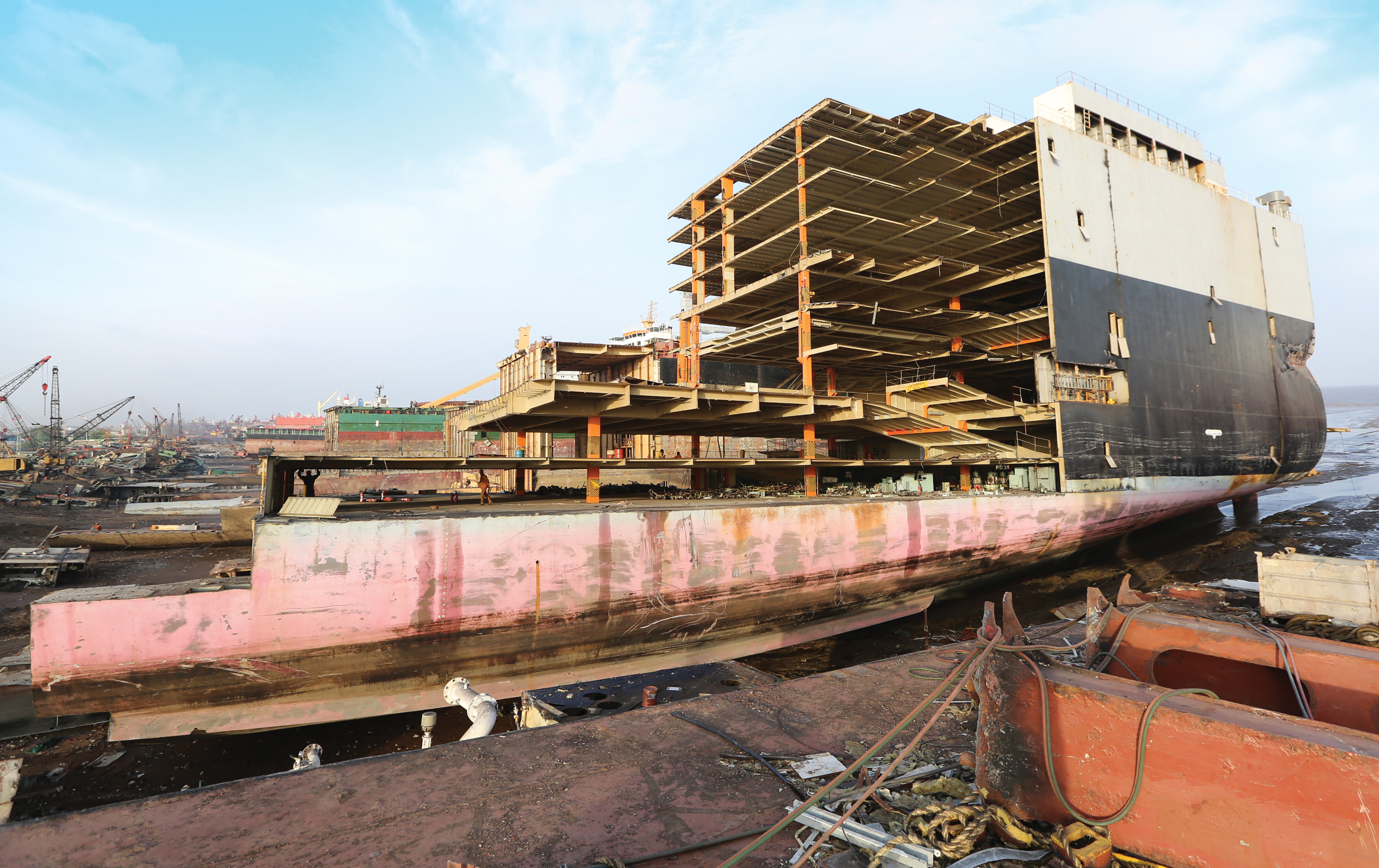